What to Look For When Buying Pork 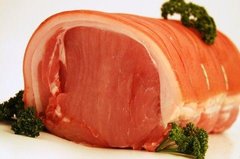 When buying pork, look for cuts with a relatively small amount of fat over the outside and with meat that is firm and a grayish pink color. For best flavor and tenderness, meat should have a small amount of marbling.

Retail Cuts of Fresh Pork: There are four basic (primal) cuts into which pork is separated: shoulder, loin, belly and leg.

Oxygen is delivered to muscles by the red cells in the blood. One of the proteins in meat, myoglobin, holds the oxygen in the muscle. The amount of myoglobin in animal muscles determines the color of meat. Pork is classified a "red" meat because it contains more myoglobin than chicken or fish. When fresh pork is cooked, it becomes lighter in color, but it is still a red meat. Pork is classed as "livestock" along with veal, lamb and beef. All livestock are considered "red meat."

Pork is the edible flesh of domesticated hog or pig. It is the meat from the pig/swine/hog), meant to be eaten fresh, as opposed to bacon and ham which are preserved by smoking/salting/ any other method of preservation. Pigs are one of the oldest forms of livestock, having been domesticated as early as 7000 BC. Pork is derived from the French 'porc' and Latin 'porcus' meaning "pig". It was one of almost 500 French words pertaining to cooking, food or eating that had entered English usage after the Norman Conquest.

Consumption of Pork in moderate quantities is helpful in gaining energy. It is good for skin, eyes, nervous system, bones and mental performance. Intake of Pork also ensures better immunity to body due to presence of essential antioxidants